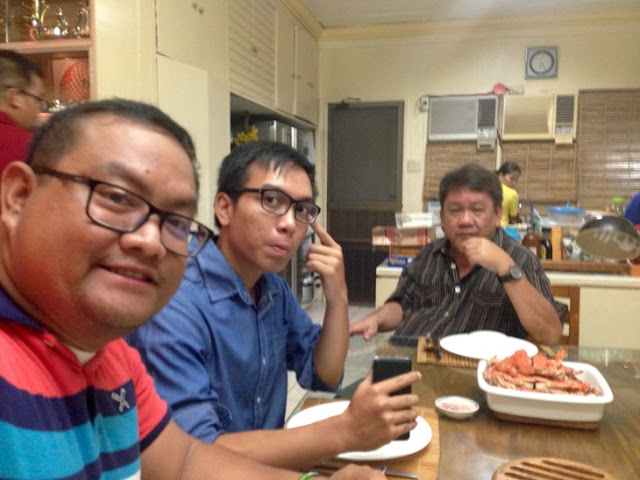 Some bloggers of the Cebu Blogging Community had dinner with former Cebu City Mayor Tomas Osmena a couple of nights ago.  I was fortunate to be one of the few people invited to the dinner and I realized that there was more to the strict and tough person that Tommy Osmena has been portrayed as. That night, I found out that Mayor Tomas was articulate, passionate, and most of all, he loves cooking. The group had an awesome dinner with the former mayor, highlighted with some dishes cooked by him, worthy to be featured in Kalami Cebu.

Our dinner was scheduled at 6 p.m. and we arrived at the house of the former Cebu City Mayor and Congressman a few minutes before 6 p.m. At exactly 6 p.m., ex-Mayor Tomas Osmena came out of his room, greeted us, then proceeded to do a live cooking demonstration.  For him, cooking is a form of therapy and he loves to cook for guests. 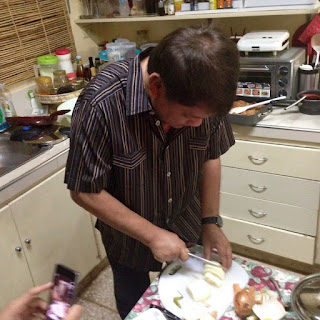 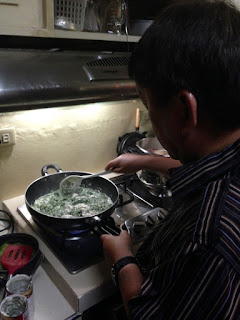 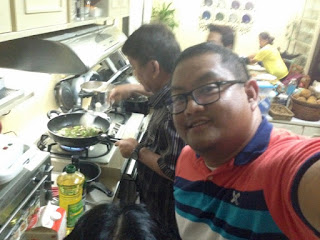 After cooking two interesting vegetable dishes, the mayor had a little chitchat with us and also had time to play with his grandchild, Anita.  After a few minutes, the food was served. 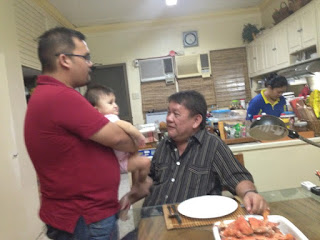 The Food during the Dinner with former Mayor Tommy Osmeña

We were served a feast that included delicious meat and seafood dishes, complemented with the two vegetable dishes that Sir Tommy O. cooked.

Fabada is a Spanish stew using beans. The version at the Osmeña dining table was a bit a soupy. It had mushrooms, pepper, ham, and pork knuckles.  The pork had that "fall off the bone" tenderness. It was reminiscent of balbacua, but with more flavor and a less oily soup.  It was the type of dish that makes you eat a lot of rice. The soup was mild and really enjoyable. 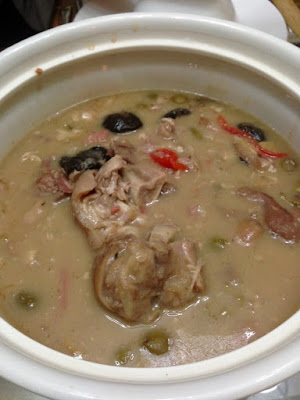 The chicken dish that was served was also a stew, but the sauce was reduced further, compared to the fabada.  It was indeed yummy.   The dish had button mushrooms and red bell peppers.  It had a good balance of saltiness and spiciness.  The sauce was so good with rice, as well. "Lami ibahug!" 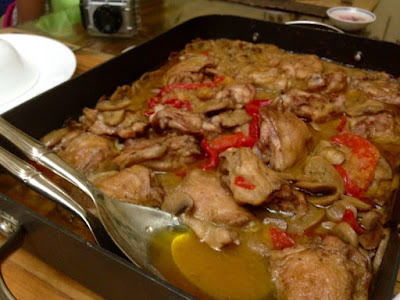 Somebody from Pasil gave the former mayor some good-sized female lambay or crabs. It was just steamed, which is one of my favorite ways to cook crabs.  I think I finished around 2 pieces, but it could have been more if I was eating at home. 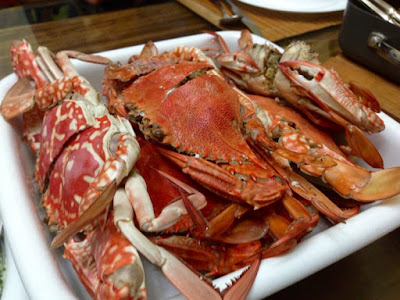 Cream of Spinach ala Tomas Osmena

I will feature the recipe of Mayor Tommy O's Cream of Spinach dish in the next few days. This excellent vegetable dish actually has no spinach in it. Instead, "Chef" Tommy used alugbati (vine spinach) and kangkong (water spinach) that was bought from the Farmer's Market in Mambaling Road.  The cream spinach is a dish that any mom should master, especially when they have young kids, who do not like to eat their veggies. The former mayor can attest that kids really love this dish. I may not be a kid anymore, but I really like it and am even planning to cook it at home. 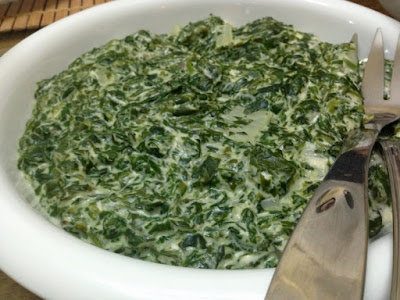 The next vegetable is named after his good friend Hon. Nestor Archival.  Since Councilor Archival is a vegetarian, Mayor Tommy usually cooks this dish whenever he visits.  The vegetable dish involves 2 of the unpopular veggies I know, the sikwa (patola or spounge gourd) and okra.  Mushrooms were added in the dish.  The flavor comes from beef bouillion. The dish is like an upscale version of "ginisang utan".  It is a very healthy dish and it is something that you would surely like to eat on a rainy day. This dish is recommended for people, who are not allowed to eat meat. 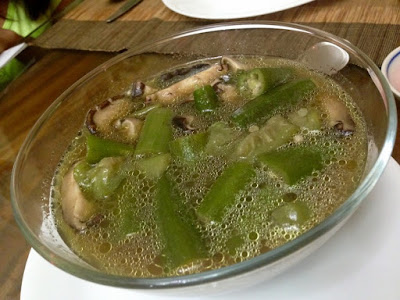 The dinner was capped with some sweet corn. 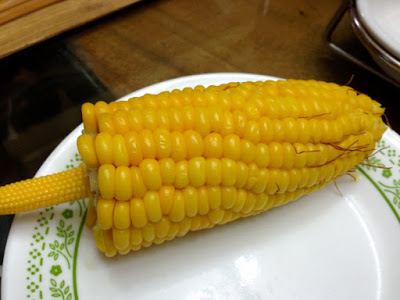 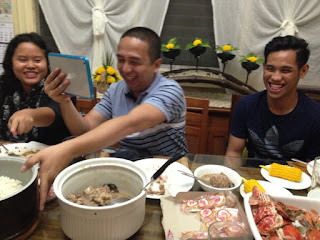 During the dinner, we listened to the plans of Mayor Tom about his vision for Cebu and ongoing projects that he has been undertaking. It was an awesome night of food for the tummy and the brain.  We had little lessons on Agro-economics, macroeconomics and microeconomics, land and fiscal management, traffic management, education, human resource development, and other things relevant to making Cebu became a top city in the world. 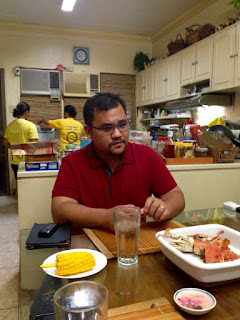 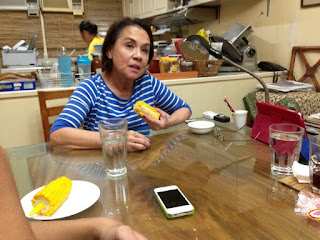 We also got the chance to talk to his son, Miguel and wife,  Hon. Margot Osmeña.  The conversation was pretty candid, as we are able to talk about light topics, like childhood and love life, aside from the matters that involve Cebu City. 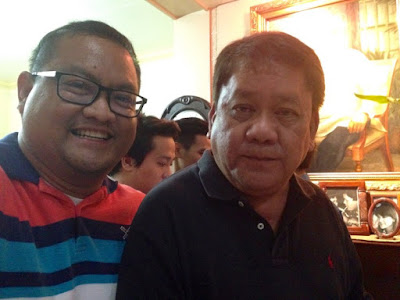 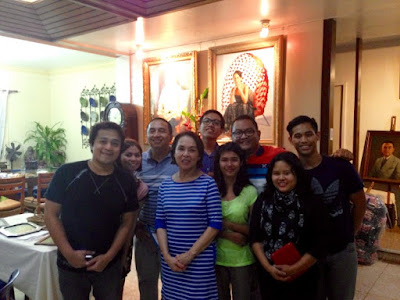 The interaction was so lively that we did not notice the time.  Our "dinner" ended past 10 p.m. I realize that one of the best ways to know people better is by sharing a meal with them. There were so many things that I discovered about one of the premier political families in Cebu. One of the most important discoveries that I learned was that Tommy Osmeña is not only good at managing a city, he is also a good cook.