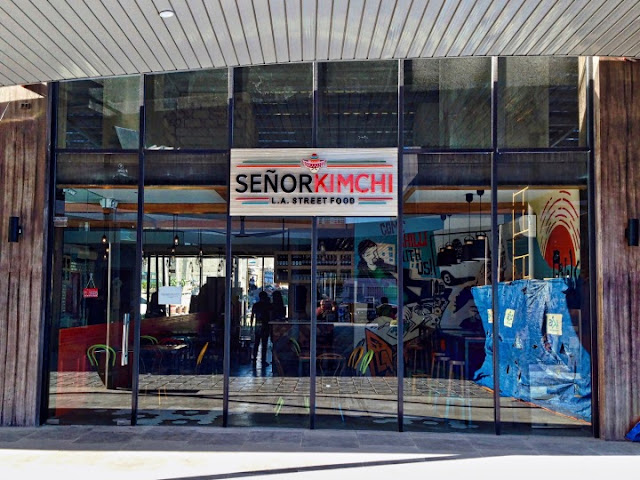 Ever since I started Kalami Cebu, I am always on the lookout for new and unique dining places. I always love to try different cuisines and I do not normally say no to any type of food.  One of the most mouthwatering trends in the restaurant industry is the creation of fusion cuisine. Combining different cuisines brings about countless of possibilities.  Some might end so-so but there a are few times that it leads to a magnificent belly-busting combination.  I can say that Korean-Mexican fusion is one of those. Cebu will finally have a bite of this exciting trend with the opening of Señor Kimchi. 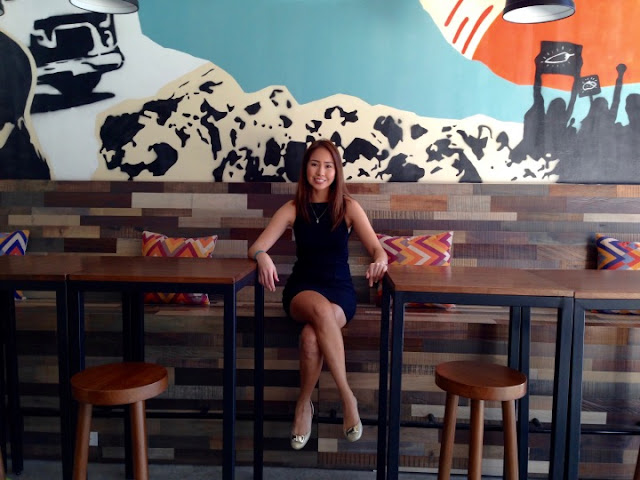 Korean-Mexican fusion has been a popular food trend that started in Los Angeles.  This type of cuisine is characterized by Mexican dishes like tacos and burritos filled with Korean ingredients like Kimchi and Bulgogi.  Many street food trucks in the United States serve their own version of this fusion. Korean-Mexican is now coming to the shores of Cebu thanks to Kimberley Dacay.

Kimberley worked a couple of years in L.A. and her favorite restaurant there serves Korean-Mexican dishes. She was able to befriend the chef of that restaurant and they eventually collaborated to open the first Korean-Mexican restaurant in Cebu. 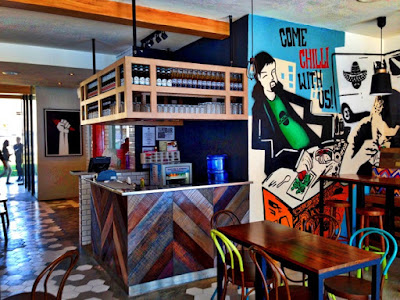 Señor Kimchi L.A. Street food opened at the Axis in Gorordo Avenue a couple weeks ago. It is a perfect place for friends to chill and have some beer paired with their Korean-Mexican favorites. Kimberley came up with their tagline "Come Chilli with us!" as an invitation for Cebuanos to grab a bite and some more at her newly-opened place.

I was lucky to be one of the first bloggers invited to this restaurant. I was able to try many of their dishes and I was blown away.  I got a fair idea that this two cuisines could work together but the end result surpassed my expectations.  Here are the dishes that I have tried so far at Señor Kimchi: 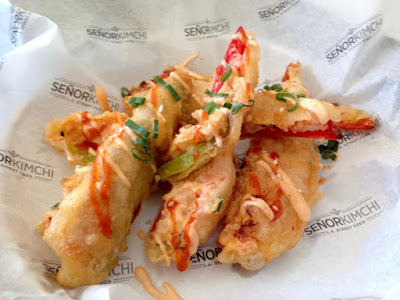 This is like their version of Dynamite lumpia. Originally, the plan was to use Jalapeño but that kind of pepper is really scarce here in Cebu. The  Pepper Bombs are a joy to eat.  It is crunchy and full of flavor.  It is not really spicy which make a good starter for everyone. This one could be a good pulutan as well. 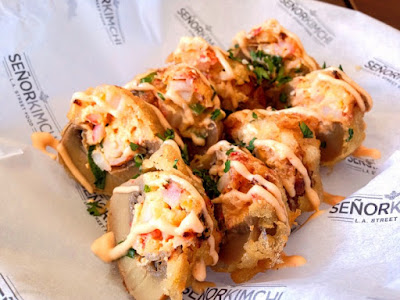 This dish practically has the same ingredients as the pepper bombs but this uses mushrooms instead. If you are taking someone to a date, make sure to order two. Your wife/girlfriend/date will surely love this.  It is an instant favorite. Kids would probably rave about this as well. This is one of the best ways to prepare the usually boring button mushrooms. 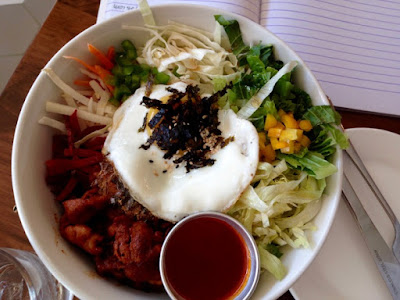 The meat can either be chicken, spicy pork, or bulgogi beef. This is a unique way of presenting the Korean Bibimbap as traditionally, cooked vegetables are used instead of fresh ones. The special gojuchang (chili pepper paste) is made by Kim.   This is a great balanced meal for athletes in training. The owner of Señor Kimchi is an accomplished triathlete and most likely this is one of her favorite post workout or post race meal.

Mound of fries, beans, cheese, jalapeño, and meat on a crispy tortilla shell drizzled with spicy aioli and sriracha. 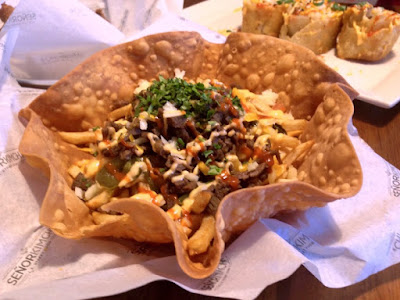 Another good starter to share. It's like their version of loaded nachos but with some Asian-inspired seasoning. I love using a part of the tortilla shell to shovel some of those yummy toppings. This is the most loaded french fries that I ever had. 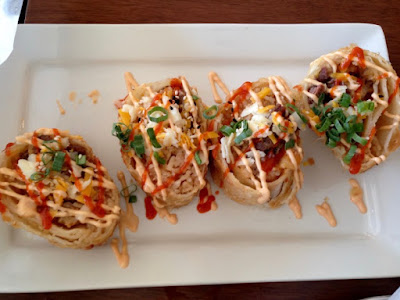 It is like a typical chimichanga but they use Korean flavored meat that gives this dish a unique flavor profile.  It is a filling meal on its own. Just imagine eating a super-sized lumpia that is filled with an appetizing mix of rice, meat, beans, and cheese. 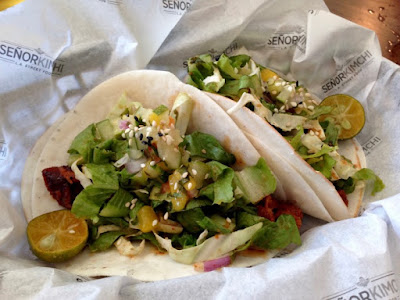 Their tacos are really refreshing. The veggies are crunchy.  I love the play of different flavors and textures. This is an epitome of the perfect marriage between two seemingly unrelated cuisines. No wonder this type of fusion is such a big hit in Los Angeles. 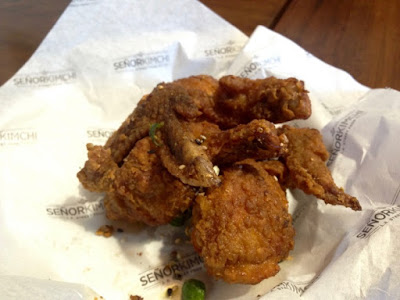 It's fragrant and not too spicy. It is a nice complementary dish to order if you are relatively new to Mexican cuisine.

A cup of rice topped with marinated pork belly, kimchi, and mango salsa 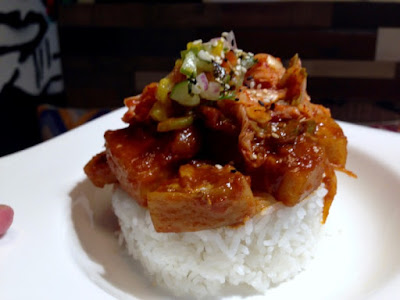 According to the owner, this is one of the most surprising best sellers that they have.  If you can't live without rice then order this at Señor Kimchi. 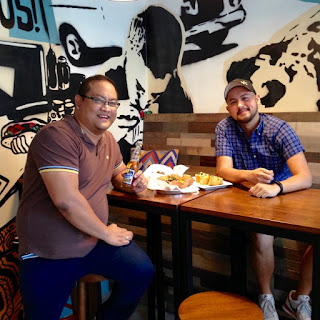 Kim wants Señor Kimchi to be a place where yuppies hang out after work. A place where people can enjoy some cold beer while eating yummy Korean-Mexican creations. The place has potential. I think the Instagrammers would love it here.  They have many #foodporn-worthy dishes and they have nooks that are just perfect for that #OOTD post.  It could also be a good place for couples and families as well. It is just one of those places where a food trip becomes one great adventure for your tongue and other senses. 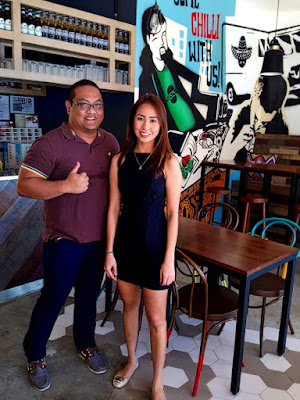 If you are for a new place for your next food trip, just head down to Señor Kimchi at Unit 18F Axis Entertainment Avenue, Escario Street.   #ComeChilliWithUs

What do you think of Korean- Mexican fusion? Have you tried it here? Share your thoughts by leaving a comment.