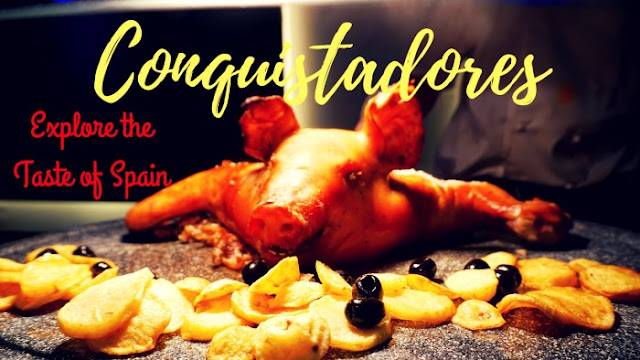 Puso Bistro and Bar at Quest Hotel is taking their dinner buffet up a notch by bringing in some of the most beloved Spanish dishes to the buffet table. The Spanish dinner buffet dubbed as "Conquistadores Explore the Taste of Spain" is served every Tuesday and Friday of March 2017.  You can enjoy Spanish favorites like Paella, Cochinillo, Callos, and Lengua along with other Puso Bistro and Bar buffet favorites like sashimi, flavored puso, yema, halo-halo, and barbecue for 850 net per person.

Conquistadores Explore the Taste of Spain

I am an Olano.  Most probably someone among my ancestors came from the Basque region of Spain. Maybe it is my ancestry that is causing me to love Spanish dishes especially the offal ones.  I like eating dishes that feature animal innards like local dishes paklay and dinuguan.  Well, the Spaniards also love to cook these weird parts.  My favorite Callos is made of ox tripe and Lengua Estofado is made of ox tongue.  When Quest Hotel announced that they have a Spanish Dinner Buffet at Puso Bistro and Bar, my inner conquistador got so excited.

Aside from usual favorites, here some of the other dishes that one can taste during the Spanish nights at Puso Bistro and Bar: 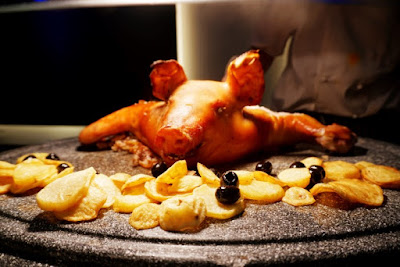 This is basically like our lechon but they used a suckling pig instead of a full-grown pig.  This is actually also called lechon in other Spanish colonies.   Lechon is derived from the word leche which means mother's milk. In the Philippines though, lechon refers to all kinds of roasted pig.   The meat of the cochinillo is really tender and the skin is crispy.  If you enjoy lechon, most likely, you will love this one as well. 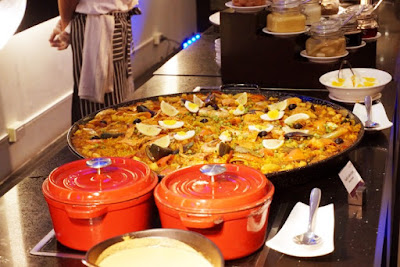 From the Spanish colonies, we now go to Valencia and have some Paella. Paella comes from the Old French word paelle which means pan.  This delicious and colorful rice dish is cooked and served in a paellera.  It is a meal on its own because it has meat ingredients and the most popular paella feature different kinds of seafood.  Puso Bistro and Bar has a big paellera during their Spanish nights.  Dine there on Tuesdays or Fridays of this month to feast on paella with other Spanish offerings. 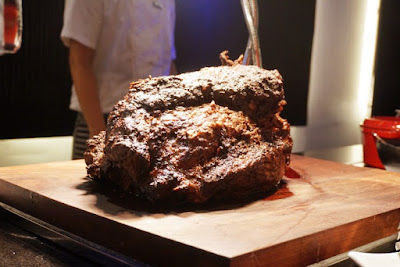 This is basically a Roasted Whole Chuck Eye with Cabrales (Blue Cheese) and smothered onions.  When I go to an all-you-can-eat buffet, I usually check the carving station to judge the whole spread. I always give a lot of plus points to any restaurant that offers a high-quality roast beef. Quest Hotel definitely had me at Roast Beef!

This soup reminded me of Mayor Tommy Osmena of Cebu.  He served us Fabada a couple of years ago when we had dinner at his house.  Check out this blog post.   It is a stew made of white beans or frijolis blancos (Hi +Hannah Frej !), pork, chorizo, and saffron. It is a great starter although you have to take it slow because this soup can you make you feel full easily. 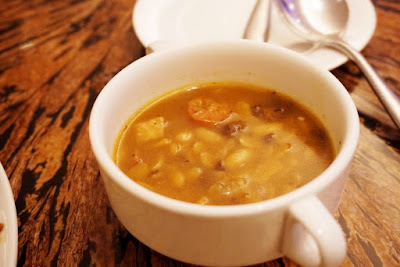 This soup reminded me of Mayor Tommy Osmena of Cebu.  He served us Fabada a couple of years ago when we had dinner at his house.  Check out this blog post.   It is a stew made of white beans or frijolis blancos (Hi +Hannah Frej !), pork, chorizo, and saffron. It is a great starter although you have to take it slow because this soup can you make you feel full easily.

Other Dishes at Quest Hotel's Tuesday and Friday Spanish Buffet

Aside from these special dishes they also serve tapas and other Spanish favorites. The nice thing about their Tuesday/Friday buffet is that Puso Bistro and Bar also serves many of their regular favorites.  Check out my video to see the other dishes and stations. 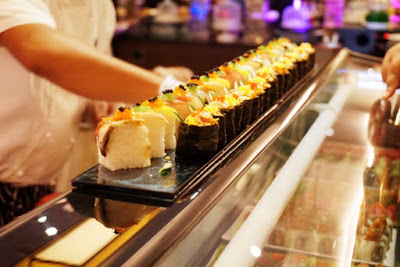 For appetizers, the Japanese station offers some delicious sushi and sashimi. They also have cheese and cold cuts.  For the Spanish night, they also serve some special cheeses from Europe like Idiazabal (From Basque made from unpasteurized sheep's milk), Asiago (From Italy made from aged cow's milk), and Roquefort (Blue cheese from South France). 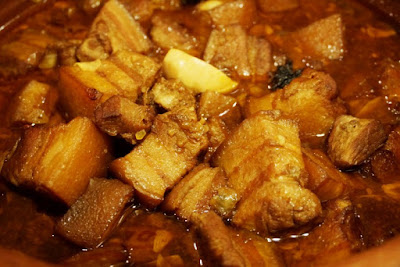 For additional main courses, they have a wide array of Filipino dishes as well as their signature flavored puso (hanging rice). They also have a noodle station, grilling station, and teppanyaki station.


To cap a fine meal, they have a well-stocked dessert station featuring assorted cakes and desserts including Spanish-inspired ones like Churros.  They also have a halo-halo station and an area serving Filipino delicacies like my favorite yema. 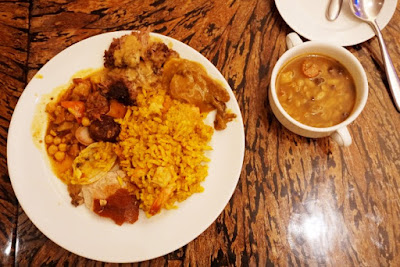 My first plate is filled with Spanish dishes.  You might ask why I went for the main course first.  Well, I went there for the Spanish night. I wanted to have the first crack of their Spanish specialties. If it sucked then the other dishes would not matter.  Well, it did not suck.  In fact, it was superb. I have a plate filled with paella, lengua, callos, cochnillo, and the roast beef plus a serving of fabada.  It was a heavy first plate but it was one big party in my mouth.  I easily finished this first plate with my appetite intact. 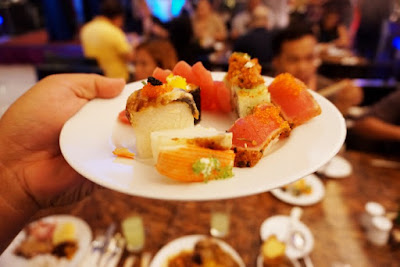 Normally this plate would have been my appetizer.  +Ramzy Magbitang and I shared this plate.  We took a lot of pictures of this one so that we can PM it to our sushi-loving friends especially +Katherine Anne Cutar. It was also an easy plate to finish. 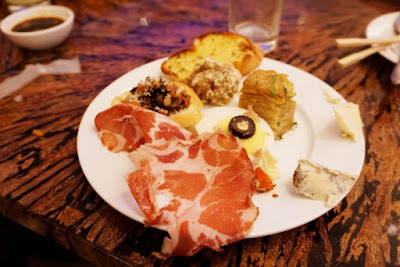 I took some tapas like the almondigas (meatballs) and bruschetta.  I also got some of the special cheeses for the night and some cold cuts.  I started heavy then I went light which is kind of weird but I was really enjoying my dinner. 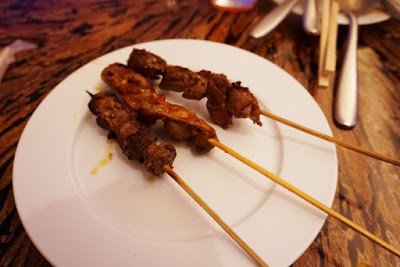 I have to pay homage to my Filipino roots.  I got some barbecue.  I had pork, gizzard, and liver.  I was amazed that they have offal offerings in their barbecue station.  These are my street food favorites and I am enjoying it at the comforts of Quest Hotel's Puso Bistro and Bar.  For this alone, I can say Hail to the Chef!  It is just pure genius. 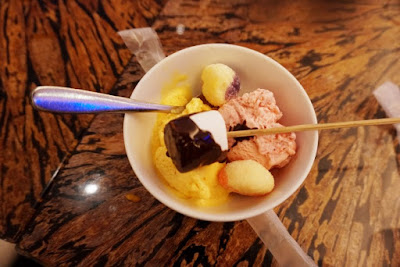 I tasted a lot of flavorful dishes that night and I have to balance everything with something sweet. I took small bowl then I got a scoop of strawberry and mango ice cream then took 3 yemas then topped it with a marshmallow dipped in chocolate.  Burp!

I ate five platefuls in two hours.  It was spectacular and I would love my readers to try it.  If you have an appetite like a Spanish Conquistador, I am pretty sure that your 850 pesos will feel like a bargain. The selection is excellent and the quality of dishes is outstanding.

Before I conclude this mouthwatering post, I would like to congratulate Miss Mia Singson-Leon on her appointment as the new General Manager of Quest Hotel and Conference Center Cebu. All I can say is that I Came, I Ate, and I Conquered!!! Viva Espana!!!!