Best Restaurants in Cebu: The Weekend One of the first ever favorite restaurants of Kalami Cebu was Carnivore in The Gallery, Mabolo.  I was so impressed with the Cebuano chefs who managed it because they were not afraid to innovate and use some advanced cooking methods.  Too bad, they closed down already.  I really missed the meat dishes of Kurt Famador and company.  I was hoping to see more Cebuano culinary talents to step up their game and compete with the "big boys" of the local restaurant scene.  Then, The Weekend happened!  As #TheWeekendPH turns 1, I do believe that Chef Jan Rodriguez took the cudgels of becoming the benchmark of an excellent local restaurant.

In the local restaurant industry, the easy path to success is to open a restaurant that offers Filipino food but there are people who dare to defy norms and surpass expectations for local chefs. In the past couple of years, we have seen several outstanding restaurants that set up shop in Cebu. Most of them were bannered by foreign chefs. For decades now, we also saw the rise of culinary schools that pumped hundreds of graduates yearly to the vibrant Cebu hotel and restaurant industry.  Some graduates even opened their restaurants after just a couple of years removed from culinary school.

I expect a lot of good things in the Cebu restaurant scene because there is a lot of room for growth in the industry plus the abundance of talent available.  But I am a bit disappointed because only a few Filipino chefs are brave enough to go head to head with the foreign chefs who made Cebu their second home.

I have nothing against foreigners who run local restaurants.  In fact, I always admire their level of competence and competitiveness.  Many of the foreign chefs are actually the ones who are pushing the boundaries in developing the local cuisine. Their restaurants are actually one of the best breeding grounds of local talents, not just in the kitchen but also, in the front of the house.  These foreign-manned restaurants also elevate the local dining culture by introducing new flavors, new dishes and even, new dining habits like food and wine pairing.

Because restaurants like Pig and Palm, Abaca Group, Circa 1900, L'Artisan, Soho Park, and Anzani are so good, only a few local chefs venture into the fine-dining scene.   One of them is Jan Rodriguez of The Weekend. 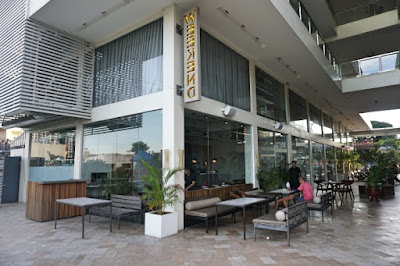 The Weekend: The Benchmark for Local Restaurants

The Weekend is located at The Gallery in Pope John Paul II Avenue in Mabolo.  It was one of the first few tenants of this commercial complex.  Many of the "neighbors" of the restaurant have either closed down already or rebranded yet this restaurant/bistro/bar/taproom has become stronger than ever.  Just like my old favorite Carnivore, The Weekend is also known for its meat dishes. 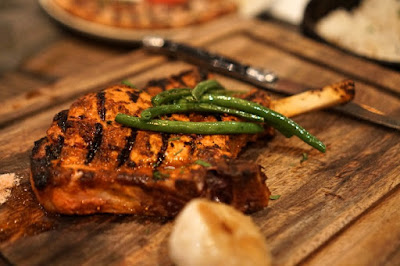 Among the most popular dishes here is the Fat Bastard.  When Jan Rodriguez perfected the recipe of his signature pork chop dish, he thought that it was so awesome that he had to give it a unique name.  The 400 grams of pork goodness has been a bestseller since Day 1. 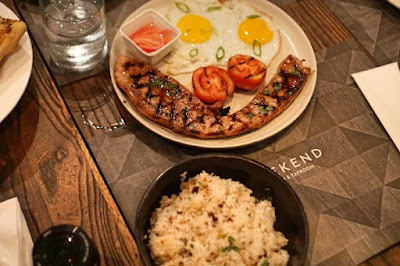 For fans of bacon and eggs, you have to try their Bacon Bourbon Steak and order extra servings of dirty rice.  The servings are good to share but this dish is also perfect for an after-workout meal. The dirty rice is like a special "sinangag" made with beef fat.  If you want to gain weight, then have a serving of dirty rice every day. 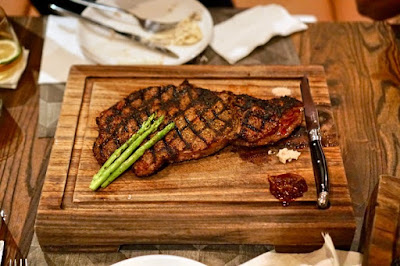 For the ultimate carnivore,  I would recommend their ribeye.  Gram for gram, it is one of the best steaks that you can find in the whole of Cebu. 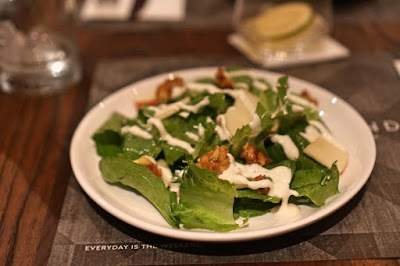 While meat lovers will truly enjoy feasting here, The Weekend also has a good selection of items that can make our vegetarian friends happy.  Jupiter's Acorn is an amazing salad that has crunchy and peppery romaine lettuce mixed with the acidity of apples and the sweetness of candied walnuts.  It is a joy to eat.  In my past visits, I introduced some of my friends to their Buffalo cauliflower.   They loved it as much as the chicken wing version. 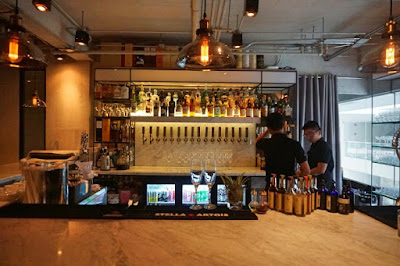 Food is just a start actually because, after dinner, The Weekend transforms into one of the best places to drink in Cebu.  Jan is probably the number 1 promoter of fine alcoholic beverages in the Queen City of the South.  He can talk about whiskey, wine, craft beer, rum, or any other alcoholic drink like someone who has a Ph.D. on Booze.  He is so passionate about it and it shows.  Check out The Weekend's taproom.  Have a drink or two and let me know what do you think about it.

When it comes to pricing, I can say that you can get your money's worth on their food and drinks.  This place is not cheap but their prices are alright.  If you consider their quality and serving size, they are definitely more affordable than their competition. 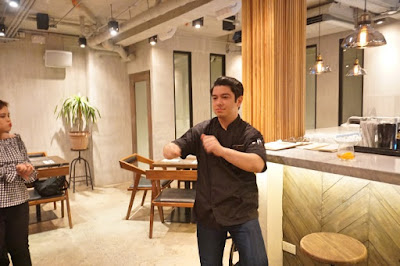 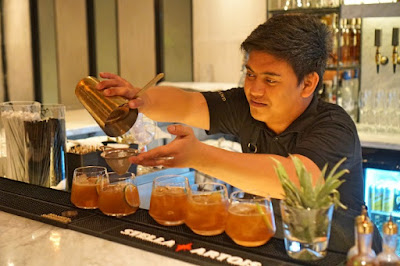 A few days ago, I got invited to dinner at The Weekend with some media friends.  We all arrived before 6 pm and Jan started us with some Dark Daiquiri.  Jan talked about how hard for a bartender to perfect a simple daiquiri.  For the Weekend's Dark Daiquiri, he took inspiration to a certain type rum (Demerara rum) that tastes like brown sugar and made a cocktail with strong hints of brown sugar and molasses.  Well, their dark daiquiri was easy and fun to drink.  It was really refreshing and the balance of flavors will make you drink some more and most likely get you wasted if you are not careful.  I liked it a lot. 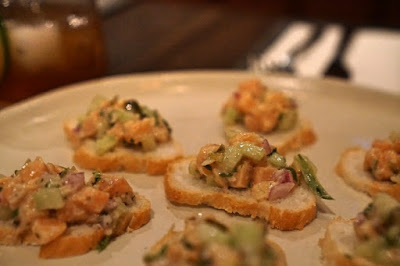 We then started our dinner with the canape version of a Salmon Poke dish that has yet to be introduced.  It was like a really good Norwegian Salmon kinilaw that was served on top of toasted bread.  It works!  Then we had the Jupiter's Acorn as our salad. 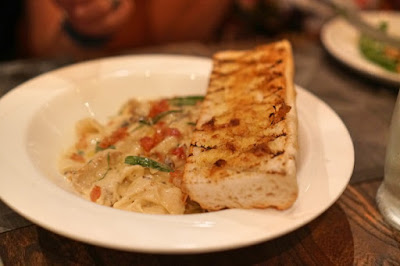 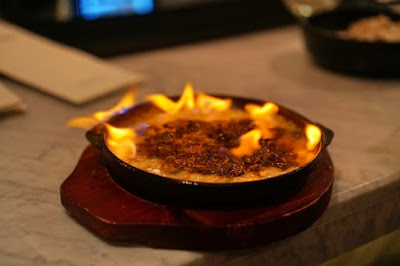 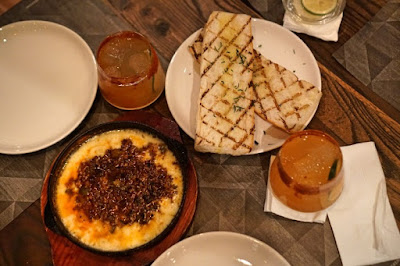 When the Queso Flameado (Flaming Cheese) and Juan Elevado (Tequila Cocktail) arrived on the table.  Ending the anniversary dinner with some cheese and tequila made it as memorable as the discoveries I made talking to Jan, Patty Taboada, Antonio Java, Alexis Yap, Dr. Nestor Alonso, Glenn Loop and Honey Loop.  On that night, I learned a lot about rum, steaks, soy sauce, and even the secret ingredient for a delicious siomai. 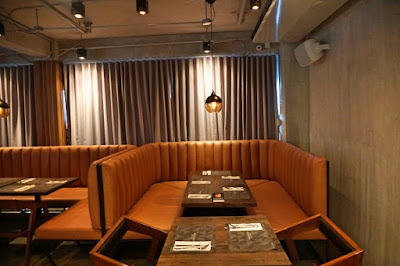 What are you waiting for? Head down to The Greenery in Pope John Paul II Avenue and dine at The Weekend!  Those comfy seats are waiting for you.