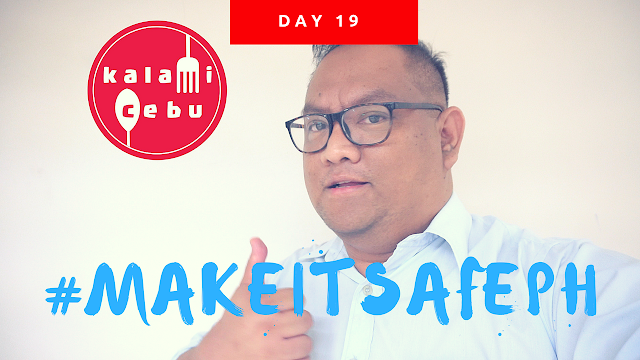 A few days ago,  I was asked to write something related to Globe Telecom's #MakeitSafePH campaign.  I mindfully said "Yes", because I agreed with the premise that we need to make the internet safe.  I was just supposed to write the article on my other blog but then an incident happened recently that gave me an urgency to support this campaign not only through words but also on video.  Content creators are exposed to hateful language daily and it is time to make a stand.


#MakeitSafePH: The Most Prolific Social Media users in the World

In 2017, the Philippines had around 67 million internet users according to Digital in 2018.  The figure is roughly about 60% of the total population of the country.  It is up from 60 million the previous year.  For the 3rd straight year, we, Filipinos, hold the distinction of spending the most number of hours in social media.  As internet usage increases and the access to internet spreads, more and more children are able to access social media sites. They use apps, like Facebook and Instagram to connect with their friends and get updates. They also use Facebook and Youtube as a primary source of entertainment.

With a great potential audience and the chance to get instant fame, a lot of people also devote more time to content creation, like making videos, parodies, skits, or simply displaying their skills for the world to see.  It is easier now to make video content. In fact, a lot of celebrities are starting to transition to digital media.  With the improved capabilities of smartphones, ordinary people can create an entertaining or informative video that can be uploaded to Facebook, YouTube, Instagram, and Twitter.

Over the past couple of years, I have seen a substantial increase in the number of content creators.  I have seen many young creators sing, play instruments, dance, lip sync, or do viral challenges.  Some parents even make channels for their toddler.  Social media and internet are making it easy for the world to see your skills.

One of the unique features of social media that cannot be replicated by television or cinemas is instant commenting.  Facebook, Youtube, and other popular social media sites allow other users to make comments to your content. Whether it is a picture, video or blog post, social media platforms allow users (even strangers) to comment, like, and share.  Well, getting instant feedback is one of the major motivators of digital creators.  The more likes, comments, and shares that they get the more motivated they become in their craft.  However, there is actually a bad side with commenting.

#MakeitSafePH: The Bad Side of Unfiltered Commenting

Comments are the lifeblood of creators and bloggers.  Search engines and social media sites encourage content that will lead to comments and they made a term for that, engagement. The more engaging your content is, the better it will be ranked in the different platforms.  Engagement is a key indicator whether your content is viral or not. To be viral is the goal of almost all creators.  The ability to make viral posts make creators attractive to brands, politicians or just anyone who wants to run a successful social media campaign.  In short, creators ask and even encourage comments.

The need for comments gave rise to techniques like comment syndication (making friends comment on posts in return for comments on their posts), controversial content (which easily strokes emotions), spamming (cut and paste commenting), and trolling (a deliberate act of making controversial comments with the aim of getting into a fight or a longer argument).  These practices are effective ways of getting engagement but methods like trolling could go out of hand and lead to using hateful language and cyberbullying.

A lot of social media sites have unfiltered commenting especially when the commenter is using the local language or dialect. People can say anything on social media sites with little or no consequences.  Some people even use multiple fake accounts to carry out cyberbullying.  It might be a fair fight if it is between adults but in many instances cyberbullying involves children.

Having children getting exposed to hate language could also lead them to use that language on others.  Parents cannot monitor all the videos that the children watch and all the comments that they read. Some kids could think that foul and hurtful language is cool because it is common on the internet.  This will increase the chance for them to try to use hurtful words even just for fun.

#MakeitSafePH: Anatomy of a Cyberbullying Attack

A friend of mine is a parent of a 10-year-old YouTube creator.  His son makes videos about trying to solve a Rubik's Cube puzzle at the shortest amount of time usually less than 8 seconds which is actually faster than a drag race car.  Yesterday, one of the kid's YouTube videos got a hateful comment from someone.  The bad thing is that the kid reads the comments which made the parents more upset.  Here are some screenshots of the incident (photos are from my friend cropped by me). 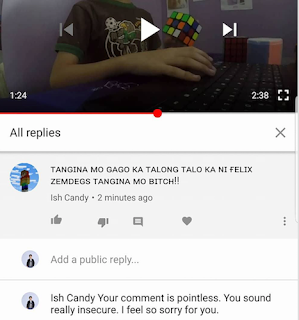 The attacker is most likely a fellow Filipino and he/she appears to be the type who watches speedcubers.  The troll made it appear that he is a fan of the world record holder and he thinks that the boy is no match for Feliks Zemdeg.  The dad simply replied that the argument is pointless. 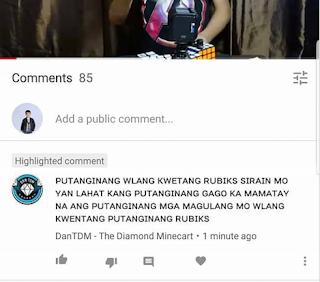 The right reaction is normally is to report the comment that will lead to a ban for the offending party. The counter to that is to use another account.  It is easy to have multiple accounts especially in sites that allow people to use nicknames as usernames.  As long as you have a valid email account, you can easily make another fake social media account.

This time, another account is making similar attacks to the boy's content.  This time the comment is about the boy's parents. The attacker seemed very determined to look for a fight and he is not backing down. 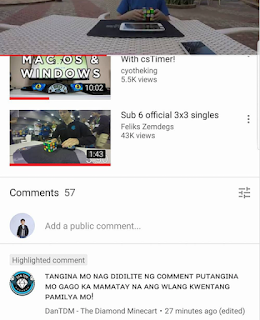 Social media sites allow channel or page owners to moderate comment on their content.  Admins are allowed to report as well as delete comments.  One of the best ways to fight cyberbullying is simply to delete inappropriate comments.  After the troll's previous comment was deleted, it still managed to make another comment.

#MakeitSafePH:  How to Limit Cyberbullying

As long as anybody is free to make comments on any content, cyberbullying will not be totally eradicated but there are ways to lessen attacks or limit its impact.  Here some tips on preventing/minimizing attacks:

There are so many young creators now making regular content on Youtube and Facebook.  They are vulnerable to trolls, hate comments, and even cyberbullying attacks.  Each one of us can play a role in making the internet safe for creators by being mindful with our comments and also in helping report inappropriate behavior.

I believe that the internet is a wonderful place for talented Filipinos to display their skills to the world.  It is also a great platform to promote our country and our people. It is important to make it a safe place for young creators so that they will be inspired to continue honing their craft and eventually become a world-class talent.

As a purveyor of the digital lifestyle, Globe Telecom takes it upon itself to ensure that society as a whole remains safe from numerous threats facing anyone using the internet – from viruses, Trojan, and Ransomware which put multi-million-peso businesses at risk, hacking attempts for illicit purposes, and cases of cyberbullying to name a few.

This campaign is relevant to the different levels of society.  For government and big businesses, the issue could be data protection.  For consumers, they could be exposed to cyber crimes like hacking, identity theft, phishing, and cyberbullying.

The internet has taken a bigger role for most of us.  While the platform offers big benefits, there are still dangers that lurk that can be prevented with vigilance and effective information dissemination.

Kalami Cebu is one with Globe Telecom in the campaign to make the internet safer.