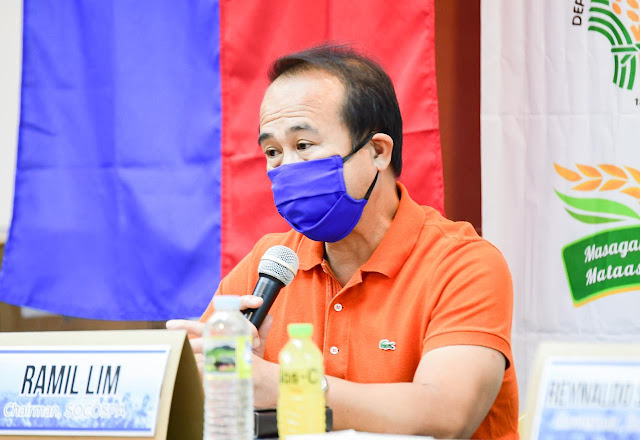 In these challenging times, it is important that Cebu will have a steady supply of food, especially meat.  As pork prices have been increasing, the local meat shops can now breathe a sigh of relief as hog raisers of South Cotabato have resumed shipping pork to Cebu,

Hog raisers in General Santos City and South Cotabato said they are ready to resume supplying a good quality, affordable and steady supply of pork meat for Cebu City after Mayor Edgardo Labella lifted the ban on entry of hogs and pork products here following an African Swine Fever infection in some parts of Mindanao in February.

“We are happy to resume supplying Cebu City which we have been doing for the last 30 years,” said Ramil Lim, president of the South Cotabato Swine Producers Association (SOCOSPA).

Lim likewise thanked Mayor Labella for lifting the ASF-related ban on hogs and pork products in Cebu City. Mayor Labella issued an executive order lifting the ban on April 28.
“We hope other cities and provinces in the Visayas will follow suit,” Lim said.

The SOCOSPA president also thanked the mayors of Tacloban City and other towns in Southern Leyte for allowing the entry of live hogs in the said nearby island. SOCOSPA hog raisers are shipping an average of eight to ten 20-foot container vans of frozen pig carcasses to Cebu City every week before the ban was imposed in February this year.  Each container van is loaded with 12 tons of headless pig carcasses.  General Santos City and South Cotabato were recently declared ASF-free by the Department of Agriculture.

All shipped pork products are also inspected and certified by the National Meat Inspection Service (NMIS) before they are loaded into refrigerated vans bound for Cebu and other destinations. 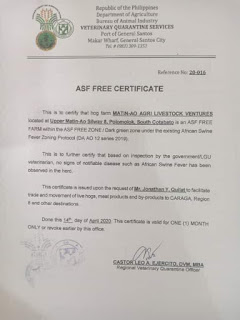 SOCOSPA livestock raisers, which primarily are from General Santos City and South Cotabato, are the largest hog producers in Mindanao.  Both have a combined population of at least 45,000 sows and are capable of producing at least 50,000 hogs every month.  At least 60 percent of SOCOSPA hog production is shipped to the Visayas, particularly in Cebu City.

The price of frozen pork carcass has reportedly gone up to P175 per kilo, prompting them to buy from backyard owners, which is still not enough to meet local demands here.  Backyard hogs have low recovery rates which, according to meat shop owners, drive prices of meat products to go up.

A kilo of prime pork belly is now reportedly selling at P300 per kilo at meat shops here in Cebu.  Frozen pig carcasses from General Santos City are priced at P135 to P140 a kilo when landed in Cebu before the ASF-related ban was imposed.
Pork Supply